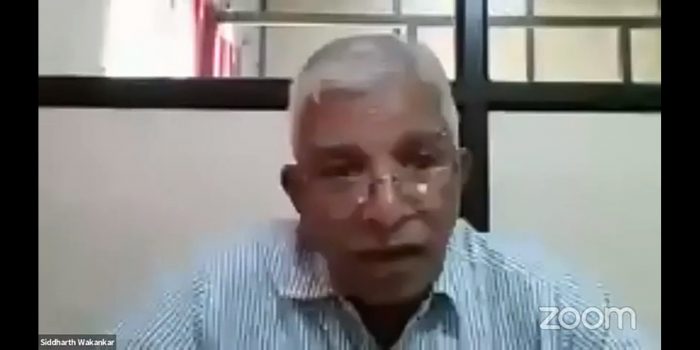 Glimpses of International Conference on Bhakti in Vaishnava Traditions Department of Sanskrit, University of Mumbai in collaboration with Stockholm University , Sweden and Bhaktivedanta Research Centre has organized three days online International Conference on Bhakti in Vaishnava Traditions on 21st to 23rd March 2022. Esteemed academicians and practioners of Vaishnava tradition have presented their research papers.

Dr.Sridhar Iyer compaired the Inaugural session. The Inaugural program started with Saraswativandana by Dr.Medha Deshpande. Dr.Shakuntala Gawde and Dr.Sumanta Rudra have welcomed and presented the preamble. Dr. Madhavi Narsalay has introduced Prof. Gopal Gupta. He stated that Bhakti is in its earliest forms found in the Bhagavata Purana and Bhagavadgita. In his speech he mentioned many forms of love reflections from Bhagavata Purana and Bhagavadgita, there are so many different forms of Bhakti, different moods, different flavours of Bhakti that are being spoken in these two profound works. The key note speaker was Srivatsa Goswami ji. Dr.Shakuntala Gawde introduced Srivatsa Goswamiji. Goswamiji explained Bhakti received various philosophical dimensions in different traditions and he has seen Bhakti as an intellectual enterprise. Dr.Ferdinando Sardella proposed vote of thanks.

The Special lecture was organized in the next session. Dr.Madhavi Narsalay introduced the guest Gauranga Das ji. The Special lecture was deliberated by Gauranga Das Prabhuji. He elaborated Bhakti element in ‘Bhakti Rasamruta Sidhu’. The Vaishnava Classic that analyzes the various stages of Bhakti (Devotion) as a methodical practice resulting in Love of God.  In this book, a metaphor used comparing an Ocean (Sindhu) to a devotional relationship with God. He conveyed that loving relationships are enjoyable like sweet nectar and deep like an ocean. However, Devotion is truly only meant for the supreme beloved, Krishna. Dr.Suchitra Tajane proposed the vote of thanks.

The Next academic session chaired by Dr.Gauri Mahulikar. The session moderated by Mr.Ajay Pendse. Three scholars have presented their research papers. Dr.Abhishek Bose the first speaker presented a paper on Bhakti in Gaudiya text. He explained ‘Bhavashabalya’ in Chaitanya sampradaya very beautifully. The next speaker was Dr.S.Padmanabhan with the topic Bhakti in Vishishtadvaita Tradition. He pointed out the difference between Bhakti and Bhaktiyoga very aptly. The third speaker was Dr.Ranganayaki Krishnan with the topic Bhakti in Alvar hymns. She elaborated Ananya Bhakti that is ‘Anyashrayanam Tyagah’ very beautifully with chanting of stotras. Dr.Gauri Mahulikar given her expert comments and given examples of Uttama, Madhyama and Prakrit Bhaktas. And stated a wonderful example of Marathi Saint Namdev Maharaj. Dr.Suchitra Tajane has proposed the vote of thanks.

The second day started with academic session 2 which was chaired by Dr.Nirmala Kulkarni. The first speaker was Smt.Prakriti Goswami with the topic Bhakti in Pushti Sampradaya. She elaborated the Bhakti elements in Siddhanta Muktavali of Shree Vallabhacharya and stated the aesthetic mood of Bhakti. Next speaker Dr.Kiyokazu Okita presented a scholarly paper on the topic Bhakti in Dvaita Vedanta. He focussed on Madhusudana Saraswatis commentary.  The next speaker Dr.Siddhartha Satapathy presented a paper on Bhakti in Odiya Bhagavata. He explained the connection between politeness and Bhakti with the reference of Jagannath Das’s Bhagavata. The next speaker Dr.Shakuntala Gawde presented a paper on Govardhana-Haridasavarya (the best devotee). She explained the Govardhana manifestation as a Bhagavan Krishna, as a Haridasavarya and as a Radha in a very scholarly way. She given many textual references from Vedas, Upanishads, Philosophy etc. Session moderated by Smt.Shobha Sahasrabuddhe. Dr.Sapana Chinnurkar proposed the vote of thanks.

The Evening session started with the scholarly lecture by Dr.Ravi Gupta. Dr.Shakuntala Gawde introduced Dr.Gupta. Dr.Gupta elaborated the Prema Bhakti in Gaudiya Vaishnavism. He elaborated the essence of Premabhakti which refers to a stage of Bhakti which is characterised by the appearance of prema, the perfectional stage of devotion; The second scholarly lecture given by Dr.Kenneth Walpey. Dr.Medha Deshpande introduced Dr.Kenneth Walpey. His topic was To take place- marking sacred territory in Bhakti hagiography. He explained that for the Gaudiya Vaishnavas, Bhakti is enacted in wandering and remembering, as a search for the lost/separated beloved Lord of one’s life. This enactment brings one or ought to bring one- in communion with all beings, locating one in a place that is ‘sacred’ not in the sense of ‘taboo’, ‘set apart’, but rather as place of eternally expanding living, beyond the confines and miseries of birth and death. Mainly he focused on a single early 17thc. hagiographical accounts of Chaitanya’s pilgrimage to Vrindavana to Jagannatha puri.

The academic session of day 3 has been chaired by Dr.Kala Acharya. Three scholars have presented their papers. Dr.Prasad Akolkar was the first speaker with topic Bhakti in Varkari Sampradaya. He elaborated the essence of Bhakti in the Bhagavata/ Varakari Sampradaya especially in Maharashtra. Dr.Madhavi Narsalay was the second speaker, her topic was Vernacularaization of Bhakti- study of two Marathi commentaries of Bhagavata Purana. She pointed out that, The Bhagavata Purana is the home ground of Bhakti, in its practical aspects. So, to help the common folk understand Bhakti with its nuances, the Bhagavata Purana was vernacularized by scholars. It was not just vernacularization of the text, but vernacularization of the Bhakti concepts in it. The next speaker was Dr.Purnima Dave and her topic was Devotion in Nimbarka and Swaminarayana Philosophy. She elaborated Nimbarka’s Bhedabheda philosophy, duality and nonduality at the same time, or dualistic non-dualism and also focused on the Bhakti Sampradaya of Swaminarayana which advocates God within the disciplines of Dharma. The last speaker of the session was Dr.Sriram Iyer with the topic Krishna Bhakti of Madhusudana Saraswati. He defined the bhakti element in Madhusudan Saraswatis ‘Bhaktirasayana’ in a very apt way. The session moderated by Dr.Medha Deshpande. Dr.Suchitra Tajane proposed the vote of thanks.

The Valedictory function was started with Mangalacharana by Ms.Kanakvalli Santhanam. Dr. Shakuntala Gawde introduced the Chief guest HH.Tridandi Chinna Jeeyar Swami who contributed in the making of ‘Statue of Equality’. Swamiji delivered a thought provoking and inspiring speech. Dr.Rajesh Kharat, Dean of Humanities delivered important speech. The special lecture on Constructing the Aesthetic Self of the Bhagavata Purana given by Dr.Ithamar Theodar from Zefat College, Israel. Dr.Shakuntala Gawde and Dr.Sumanta Rudra proposed vote of thanks.